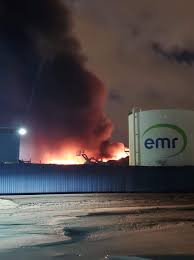 “If the Camden non-profit was to be successful in its appeal to state officials, EMR would be required to expand its record-keeping, have additional permits to operate and adhere to the Solid Waste Management Act, the Eastern Environmental Law Center said.”

Noxious smoke billowing into the southern part of the city. Explosions that could be heard throughout downtown. Walls shuddering in buildings by the waterfront.

All have been issues faced over the years by Camden residents, which they say are tied to the ongoing practices at the nearby Eastern Metal Recycling facility.

Eastern Metal Recycling, or EMR, is a UK-based recycling business with yards throughout the world including Newark and Egg Harbor, according to its website. In Camden, the company runs My Auto Store, an EMR subsidiary, on the 1400 block of Ferry Avenue that recycles used cars, and a sprawling recycling center on the waterfront that processes recyclables and other waste.

A spokeswoman with the NJDEP said the agency “does not comment on matters of possible or pending litigation.”

“We received the notice letter on Friday, August 5, and will comment when we have completed investigating the allegations therein. We look forward to responding in full at that time,” Michael Gross, general counsel for EMR, said in a statement.

The Aug. 4 Environmental Rights Act notice, a legal action submitted before filing a lawsuit, was sent via email and mail on behalf of the non-profit by the Eastern Environmental Law Center, based in Newark. It specifically points to the Camden facilities at 1531 Ferry Avenue and 1251 South Front Street. EMR facilities in South Camden have been the scene of two major fires since January 2021.

“In essence, EMR has been a terrible neighbor to South Camden residents. EMR’s operations have negatively impacted the South Camden community in numerous ways, from fires and air pollution to noise and odors,” the Center for Environmental Transformation says in the notice. “Following the fires, EMR community liaisons exhibited an abysmal lack of transparency with impacted residents; they failed to communicate the causes of the fires, were combative when speaking to residents, have not taken community concerns seriously, and consistently failed to take meaningful steps and appropriate precautions to safeguard their workers and the community.”

If the Camden non-profit was to be successful in its appeal to state officials, EMR would be required to expand its record-keeping, have additional permits to operate and adhere to the Solid Waste Management Act, the Eastern Environmental Law Center said.

Under the regulations, EMR would also have to ensure all processing, shorting, storage, and compaction of materials on-site take place in an enclosed building. Material recovery facilities and solid waste transfer stations at the center would also need to comply with federal OSHA requirements and the New Jersey Worker and Community Right to Know Act.

The Center for Environmental Transformation did not immediately reply for comment.

EMR states online that it purchases, processes and sells ferrous grades like iron and steel, as well as non-ferrous grades such as aluminum, brass, copper, lead and stainless steel, “from a wide range of sources.”

The Center for Environmental Transformation says in the notice that based on EMR’s operations, including the “storage and processing of non-source separated solid waste,” it is not a scrap metal facility.

“In order to be considered scrap metal facilities, those operations must only accept source separated materials, because any recyclable materials commingled with solid waste are considered solid waste,” the non-profit said.

Carlos Morales, executive director of the Heart of Camden, said his local non-profit has been in conversation with EMR ever since the February 2021 fire sent black plumes of smoke throughout the waterfront south and forced some residents to temporarily relocate from their homes.

“We’ve continued to discuss, how do we co-exist? Some of the broad strokes are investing back into the community, improving infrastructure, dealing with explosions, fires … along those lines,” said Morales.

Morales, who noted there have been improvements over the last two years, said EMR has hired Camden locals to act as community liaisons and better represent the needs of the city. Still, residents continue to speak out, he said.

“I think the community has every right to vocalize how they feel about any conditions they feel EMR need to improve,” Morales said.